(For a look at the results/pairings, head on over to the Results page on chessparentresource.com.) 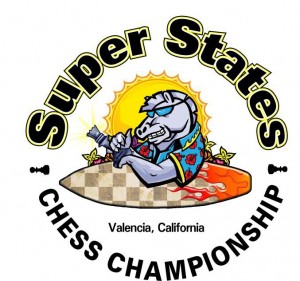 K-12
Adam Draheim defeated three players who outrated him, including an Expert (rated 2049) in the
final round en route to an 11th Place finish in the State! He earned a trophy for Best Under 1800.

K-8
Dylan Gould won the Best Under 1500 trophy after beating a 1553-rated player. Alex Tsatryan
teamed with Dylan to earn a 3rd Place Club Team award for CYCL. Thanks guys!

K-6
Andrew Sung and Andrew Deedon teamed up to earn State K-6 School Champions for Trinity
Classical Academy. Andrew S beat a B player (rated 1607) and Andrew D defeated players in
the 1300’s and 1500’s despite being the lowest-rated player in the section.
Eric Luo beat two players rated above him and gained 35 rating points.

K-3
Shreyas Sakharkar, Landon Hu, and Lizzy Pope snagged the K-3 State School Team title for
Pico Canyon Elementary. Shreyas and Landon each had stellar performances (Shreyas beat
three players rated over 1000 on his way to earning the Best Under 1000 prize while Landon
took out a 1500 and 1300) but Lizzy had the best story!

In the final round, Lizzy faced an opponent who outrated her by over 400 points. After an epic
struggle, Lizzy found herself in an endgame in which both players had only a Queen and King.
Lizzy raised her hand and explained to the tournament director (an International Arbiter – the
highest level a director can be) that she was claiming a draw because the situation on the board
was a forced draw. Lizzy had learned well in class, but the arbiter could not recall if Queen &
King vs Queen & King was an official forced draw according to the rule book and he asked her
to play on. When Coach Jay heard about this, he went to grab the rule book. By the time he
returned with the page dog-eared, Lizzy had secured her draw. Way to go Lizzy!

K-1
Tamerlan Goglichidze and Adam Kharaev teamed up to win the State K-1 School Team
Championship for Tesoro del Valle Elementary! An unrated player, Tamerlan beat players rated
in the 300’s and 400’s among his 3 wins. Adam beat a player rated over 500 (whose only other
loss was to the champion).

K-12 Under 1200
Some of Coach Jay’s most veteran students competed in this top JV division. In the end,
Stephen De Vita won his final 6 games after a 2-2 start to earn 2nd Place! Mitali Sakharkar
pushed her rating up to 1135 with an impressive 6.5 points. Leo Ouyang, Tobin Thannickal, Joe
Brennan, Ben Hartley, and Ross Pope were on the CYCL team that earned a 2nd Place Club
Team award.

Natasha & Dmitri Mertens nearly brought their Montessori school its first team trophy, but had to
settle for 4th Place team. Natasha finished just a half-point ahead of her brother (5.5 compared
to 5.0).

CYCL’s Club Team finished just a single point behind 3rd Place. Mahesh Arunachalam and Ishita
Juluru (6.0 and 5.5, respectively) had strong tournaments. Splitting wins and losses evenly (5
out of 10) were Hardhik Ram, Kevin Justin, and Laura Brennan (who raised her rating 168
points!). Collin Tang and Samuel Arreaza were right behind with 4.5.

Srinidhi Srinivasasubbu (5.5) and Michael Shubert (5.0) rounded out the CYCL team with Micah
and Prithvi en route to bringing a 3rd Place Club Team award back to CYCL!

Vaneeza Lalani’s 5-5 score earned her a 2nd Under 200 trophy (we just realized this) and, along
with Dylan Stier, Sanjay Reddy, and Nathan Kim, a 2nd Place School Team trophy for Pico
Canyon.

About
It is my pledge that I will always try my best to help your children become better people by improving their thinking skills, study skills, sportsmanship, etiquette, and awareness of the others in their world.
Latest Posts
Recent Comments
Categories
Archives